The (Not So) Real Truth About Open Offices 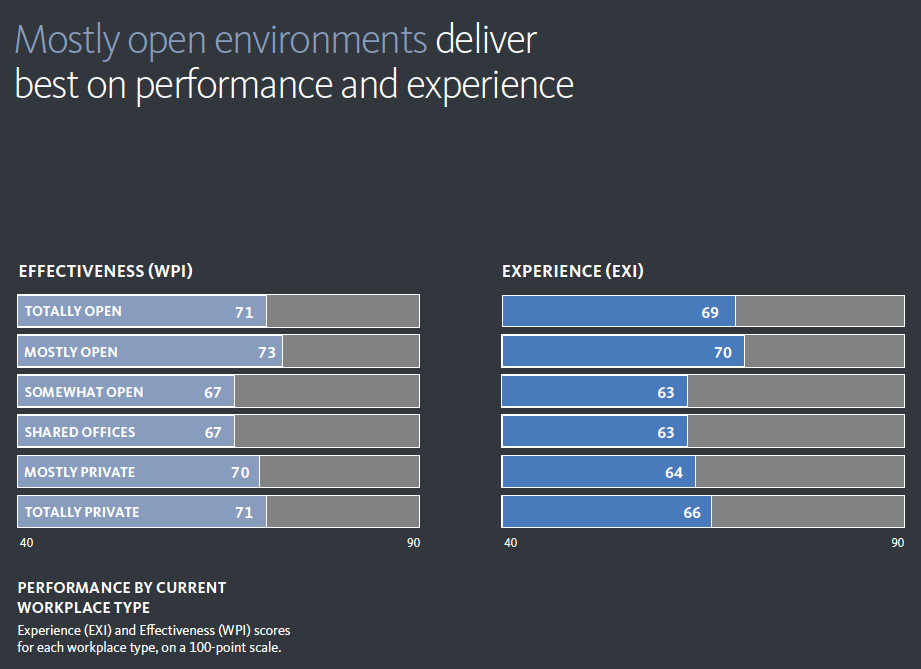 If you opened an HBR article titled “The Truth About of Open Offices” you would probably expect to find august research to support the main tenet, that “open offices reduce collaboration.” Unfortunately, in the case of this one that ran in the December 2019 issue, you’d be disappointed.

You probably heard the collective groan from the workplace community when the issue hit the street as they steeled themselves for another round of open-office-bashing.

“When the (Fortune 500) firms switched to open offices, face-to-face interactions fell by 70%” states the writer.

The research on which the article was based was originally published by the Royal Society more than a year ago. Titled “The impact of the ‘open’ workspace on human collaboration,” the article drew media attention like flies to dung. A barrage of sensational headlines followed, but did any of the editors even read the study? I think not. If they had they wouldn’t have given it the time of day. Here’s why.

The HBR article highlights that the research was based on experiments at two Fortune 500 companies. What it fails to mention is that only 152 employees participated in the studies—fifty-two in the first study and a hundred in the second. Suggesting, as almost all the mainstream articles did, that open offices reduce collaboration is akin to closing all the interstate highways because of a few accidents in a couple of places.

The study raised the ire of workplace designers and strategists for other reasons too.

As if all that’s not enough reason to question the study, consider that the technology used to measure collaboration between the participants is owned by one of the authors of the HBR article.

A biting review of the original study that appeared in WorkDesign magazine in 2018 speaks to these and many reasons to question the research.

“There’s no news here,  says Kate North, VP of Workplace Advisory for Colliers International and founder of the Workplace Evolutionaries (WE), a global workplace community of practice that includes many of the top names in workplace design and strategy. “The design community has understood for many years that people need a variety of spaces to support how they work at their best,” says North.

Creating a successful workplace isn’t easy. There are many moving parts. Factors that must be taken into account during the design process include:

The physical aspects of the space are critical to success too. Things like noise levels, air quality, access to daylight, thermal comfort, privacy, wayfinding, ergonomics, and many more factors need to fall within the ‘Goldilocks’ range if occupants are to be satisfied.

Something else we know nothing about from either the HBR article or the original research, is how well the transition was led and managed. Even if the space is perfect, if the change isn’t managed properly and/or endorsed by senior and middle management, it will likely fail.

Any office layout can be successful

The reality, based on actual research with thousands of data points, shows that any type of space can be effective if it is well-designed and the transition to it is properly managed.

Fortunately, few offices are being built as all-open these days. Large or small open areas may be part of the mix, but the majority of projects now recognize people need space for privacy, rest and rejuvenation, large and small meetings, individual and team meetings, and somewhere to sit with a cup of good coffee.

In my first year of college, my curmudgeonly economics professor continually used the phrase “all else being equal.” I bravely raised my hand one day and asked why we bothered studying such concepts because, in the real world, we don’t get to hold everything else equal. The ‘C’ I got in Econ101 that semester notwithstanding, the reality is that the world is messy and so is trying to create great workspace. What is it they say about assumptions? Something about making an as…

The bottom line here is “don’t believe everything you read” especially if it claims to have simple answers to complex problems!

Senior Executive Service Is Meant to Be Mobile, according to Lawmaker

What’s Good for People? Moving from Wellness to Well-Being